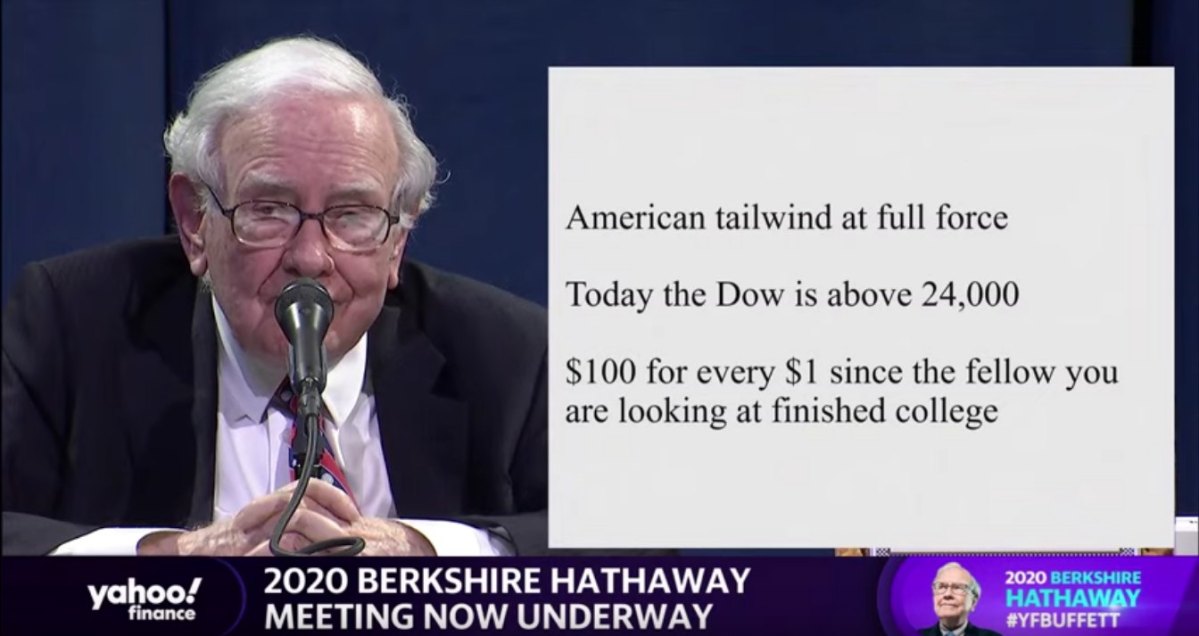 I sparked up Warren Buffett’s Berkshire Hathaway livestream, well, the recorded version anyhow. H/T Monevator. Some Ermine tips – start about an hour in, and I had to click n the unmute audio to get to hear anything. It was a funny old feeling. Warren’s sitting more or less on his tod in a massive convention hall with hardly anybody out there. It’s all very 1950’s, there’s no top end in the audio and you can hear the 60-cycle hum and noise in the amplifiers. BRK clearly doesn’t spend money on young media-savvy hipsters to tart up the presentation slides either. This is part of his homey schtick of course, but you’re sitting there watching one of the richest people in the world.

He cut a lonely figure on the podium. And while I wouldn’t go quite as far as to say he sounded scared, the headline sums up what I heard. Sure, you can count on the tailwind of American exceptionalism, but you gotta live that long to get into the upswing. And at 89, in some ways it’s in doubt that he will.

He spent a lot of time describing how if you’d been unlucky enough to buy into the DJIA before the Depression, you would have to be ready to fall back and fall back and fall back to hope that the engines of American exceptionalism would fire again into the low-water mark, and it would be 1951 before you break even. He’s not saying this will happen again, many things are genuinely different now. The intercession is likely to be much shorter, and of course he was quick to state he does not know what the markets will do tomorrow or next year.

But he didn’t give the impression he sees a V shaped recovery. He didn’t even see BRK shares as a good buy now. And he’s dumped airline stocks. I wonder what else?

In some ways I was cheered by Warren Buffett. I dumped a lot of rubbish in the first half of March. In a single hit on mainly one day. I had gotten decadent with the long bull market, and had a significant holding of the FTSE100 in VUKE. ZXSpectrum summarised it well on this Monevator thread

The high street was obsolete anyway, airlines should go bust, the petroleum industry needs massive downsizing. The FTSE is not coming back because it full of crap companies with obsolete business models. The S&P and Nasdaq are not.

I’m also more relaxed about higher unemployment. The UK made a sort of Faustian bargain: low unemployment for high underemployment and low skill base.

Machine learning and AI is going to make many middle class people unemployed. We might start getting used to it now and stop stigmatizing those who don’t have jobs. A generation or two from now being unemployed might well be the norm.

I was heavily in the FTSE100, and I was buying rubbish because the yield was decent. My main ISA1 is 13% down on what it was in January, so I showed a clean pair of heels in time. I got rid of a lot of other rubbish, because in a decadent bull run shit looks attractive and safe. It wasn’t.

And WB reminded me of that. I had lost my way, and was buying trash. Quality is worth having now. If you are going to buy, buy quality. WB doesn’t forget that, but I did.

Warren’s patriotic American exceptionalism shtick got on my tits. America is captained by a uniquely talented buffoon of the first order, who is a danger to the world and his own subjects. Trump reminds me of The Mule in Isaac Asimov’s Foundation trilogy. Just as Asimov’s psychohistorians foresaw the arc of history but failed to model a mutant intellect, the founding fathers of the United States got an awful lot right. They put checks and balances to try and control the temptations that absolute power brings. But they had no model for Trump’ particular talents resonating against a particular slice of history. There is at least cheer to be had in that like the Mule his particular combinations talents seem sui generis; we will get at least another four years of him, but the magnetic combination will probably die with him. So no, Warren, Americans do a lot right, but not so much as you’re cheering. However, in economics ZX48’s observation support WB’s thesis – compared to the US indices ours are full of crap businesses, and the US appears the only place in town for quality.

But Warren Buffett is a much better investor than me and his point is right. I need to favour quality – companies supplying what people actually want and need. I did well getting rid of the rubbish before it had fallen too far. I am intrigued the WB finds nothing at attractive valuations, because he credits the Federal Reserve with forestalling another credit crunch for companies. He thoroughly approves of the action, compared to the results of inaction, but it has corrupted the signals given by the market because of its indiscriminate behaviour. Noise floods the input, but he prefers that to the deathly silence of no noise and no signal.

And yet if Warren Buffett is saying that the compass spins and knows no North, then perhaps I have not missed the opportunity. My guess is the signals will start to return at the start of November, as we start to enter what is likely to be a long winter low in reserve capacity.

And while it’s all different now are the most dangerous four words in investing. I need to start to challenge some assumptions I have held from 2008. One is I have always been weak on the US – it looked overvalued and as I started to buy a lot of my holdings in the 2008-2014 period. Most of my US holdings are in the half of VWRL, and yes, I was wrong earlier. Don’t bet against America 😉 My market timing scored over sector selection.

In the early stages just after the GFC when I have bought individual shares, I thought more like WB. I still have nearly all those shares, mostly in my HYP. But as an index investor you can’t think like that, because you’re not buying individual shares. And I started chasing meta-parameters like yield, and following stories. The best story is Lars Kroijer, but sadly I picked up that signal late, it was only written in 2015. I still have all my VWRL.

I have been fortunate in being able to shoot the other index crap early enough, but I need to get back to basics. Good quality at the right price – and also perhaps take another line from WB. It is better to buy a great company at an okay price than an OK company at a great price. In index investing that means no FTSE100, not VHYL (which I have never owned) and perhaps I need to suck it up and consider the S&P500, and maybe the CNDX on the NASDAQ100, preferably after Trump has either won or lost and the new administration suckout goes on top of the pandemic recession. In the meantime I will continue to buy little bits of smallcaps which will become more and more bombed out. I am where I want to be with about 2/3 equity exposure now, because I have serious firepower. Buffett gave me the hope that I will have somewhere to aim that in the year(s) to come…

No, Buffett’s message wasn’t quite Bill Ackman’s self-serving Hell is Coming interview, I am glad I sold before he opened his bloody great big gob 😉 But it sure as hell rhymed.

Capt’n Buffett will make it across the water on the one defective engine, but it’s going to be a very long and rough ride to get from here to there. And he seems to believe that there is an outside chance that Dubya’s angle from 10 years ago is a very real possibility, leastways in the time he has left.

32 thoughts on “This is your captain Warren speaking – it’s going be a long night. Three out of four engines are on fire, the fourth is running rough”